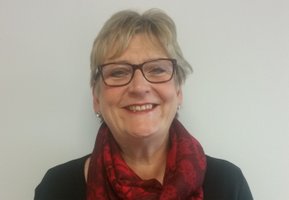 Sharon joined Salus Medical Services recently to oversee its nursing activity, having previously been involved with the Integrated Care Teams across 3 localities. We spoke about her nursing past, and teased out a little more about her.

Tell us a bit about what’s lead to you joining Salus.

I have worked in the local community since 1984 and with the same GP practice since 1994. (Where I was assigned for two weeks, originally!) Originally I was a District Nurse, converting to Advanced Nurse Practitioner 2004.

I was asked to form the Farnborough ICT by one of my Practice Partners. Due to various circumstances I became involved in the Aldershot ICT, and later I was asked to be involved with the Fleet ICT. This meant I had to reorganise my workload, and accepted the role of Associate Director of Nursing to further advance the ICT developments.

When the Farnborough ICT was formed, I joined the team members and wider partners on development days to design the ICT service to meet local needs. Once that was up and running,  it has been rolled out to other localities in North East Hampshire and Farnham, making allowances for variation because of differences in the demographic and patient needs between the localities.

What made you want to join Salus Medical Services?

The work with the ICTs has grown ever larger, but not being part of Salus meant I was constantly having to hold decision-making until I’d been able to speak to management. This new role makes me part of Salus, with the authority to make quick decisions in areas like the recruitment of nurses or ensuring clinical governance is in place. It’s a small, efficient team that’s settled enough to ensure that, while decisions are made quickly, they are also clinically safe and staff-friendly. And I already know they are nice people to work with, of course!

What’s the highlight of a working week?

One that has more days. The best thing is to reach the end of the week and feel I have achieved everything I wanted to. It’s not been that easy with several roles, but now I have given up my CCG job and reduced my hours in general practice to commit more to this new post, I look forward to more of that feeling – knowing we have given good, seamless, quality patient care.

'The highlight of a working week? One that has more days.'

It would be nice to know more about you. Do you have any hobbies or interests?

I have 2 grown-up children, one of whom got married recently and one is still at home.  I have a large, close family which occupies most of my free time.

Can you tell us something we’d never guess about you?

I used to play handbells, despite being tone deaf - I’m asked to be quiet if I try to sing!

Information for Commissioners
Does Salus have CQC Registration?